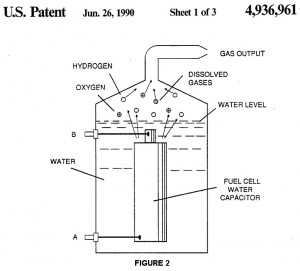 Stanley MEYER is the most famous inventor in the ‘Super-efficient Electrolysis’ field, and many took inspiration from his work. His original Electrolysis Concept was able to produce many times as much hydrogen gas as permits the Faraday’s Law of electrolysis, and the Law of Conservation of Energy, then he brought it up to a still un-understood high level he called ‘Thermal Explosive Energy’. We can say that he was at least 50 years in advance of his time … The evidence, then, is that his concept of electrolysis is tapping in another source of energy, not ‘recognized’ yet in the classical physics, that must be in another dimension, outside our three dimensions, and it must be a non thermic form of energy, because Stan Cell is not producing heat while electrolyzing.